QR-codes are known from magazines, newspapers, posters and business cards. By simply scanning the QR-code, they connect smartphone users to a particular place on the internet.

Computers are normally web connected, so there is little sense in displaying on-screen QR-codes. But these are now being used for our internet based WebCops protection on non-connected computers.

Previously WebCops offline registration required the use of another web-connected computer or contact to a hotline, involving the communication of more than 20 characters:

To simplify this process, the WebCops offline registration screen now also shows a unique QR-code generated on the spot. By scanning this, the user's smartphone connects to the web, and the necessary activation code is displayed. All this happens without entering a single character on the smartphone. 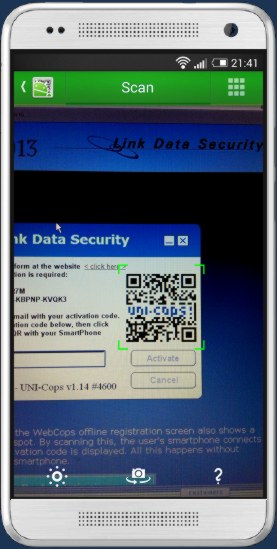 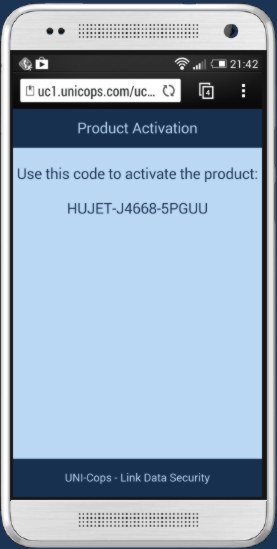 In schools, for example, the lower grades often have PCs with no internet connection. So offline activation meant writing down many characters, finding a web-connected computer, getting the activation code, going back and entering it on the offline computer. Or, even slower, sending information by email and waiting for an answer. Now the teacher can use a smartphone to scan the QR and provide immediate activation.

This new concept means that WebCops can be used where CD/DVD locking was previously considered necessary. WebCops is popular not only for downloaded contents but also for products distributed on disc. With WebCops the copy-protected software can be used on computers that have no CD/DVD drive. For computers like these, disc contents can be transferred via network or USB-stick.